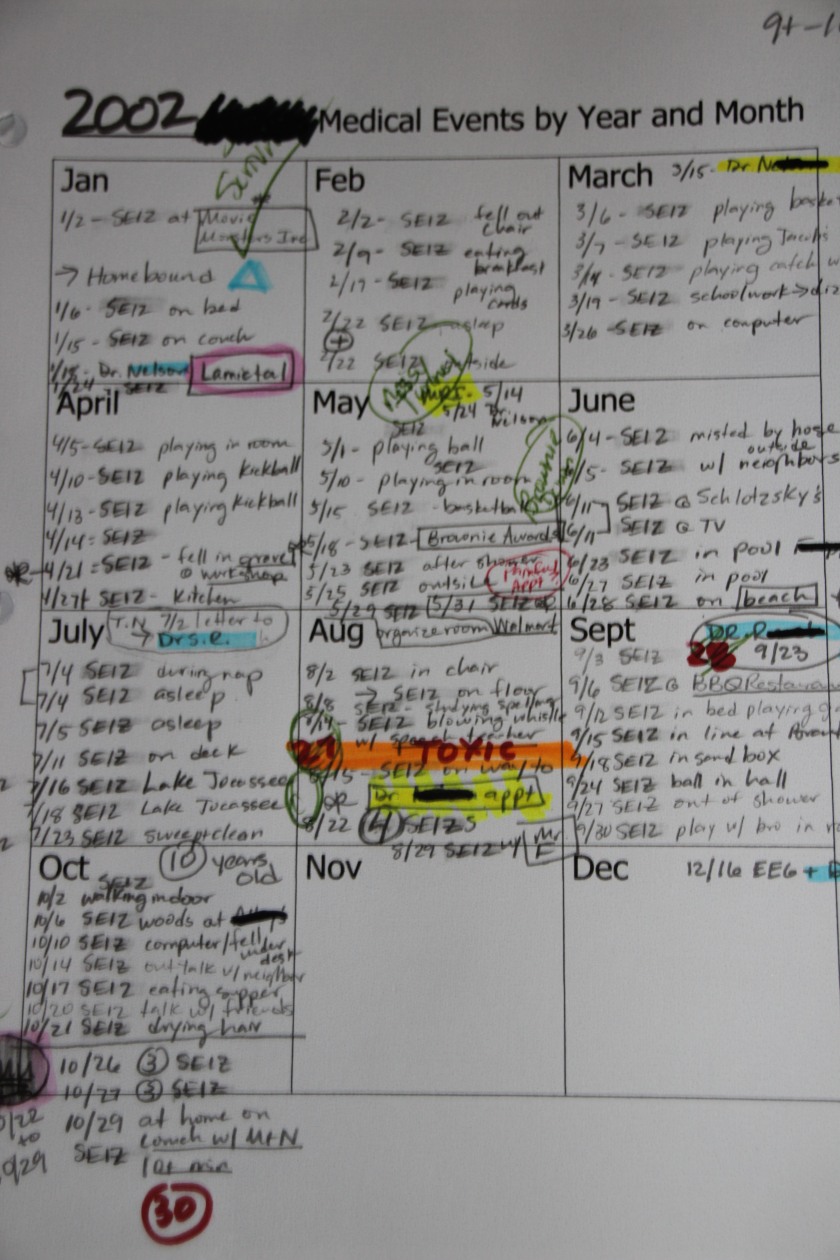 The drug roulette regimen made everything worse. Rose was not herself before a seizure nor after a seizure. She was lethargic, floppy, and dopey. She moved from her bed, to a chair, to another chair, and back to her bed. The seizures came with us wherever we went. She seized in restaurants, at birthday parties, at Brownies, in the yard, watching television, in a big box store while shopping for a helmet, at a family reunion, in a funeral home and even in swimming pools.
We took a plastic Adirondak chair with us on outings. The chair reclined slightly, so she could seize in it without falling out. For us every party was BYOC(bring your own chair), and of course the seizure bag went with us everywhere. We evaluated the risks of each outing. Should we go eat at this restaurant? No, it would be too hard to carry her out through the gift shop. She we go to a ballgame? No, seizures in bleachers are too dangerous. Should we go? No. Eventually, we stayed home waiting for the next seizure. I really wanted to buy a little wheelchair, so we could go places, but was advised against it by other family members. “Rose would look handicapped and feel handicapped.”  Yes, but she would be safe.
We walked everywhere linked arm in arm with her. A fall could come at any second. We went up and down our stairs as a unit so she would not fall. We called this method ‘stair pairs.’ To go down Rose would put her left hand on the person in front’s shoulder and her right hand on the handrail. The front person would put their left hand on hers and also hold the rail with their right hand. Going up would be reversed with her escort behind her. Rose would announce when she wanted to go up or down and someone would stop what they were doing and escort her. We made it a point to not say no to her requests to use the stairs. There was so much she could not do at this point; at least she could be free to move about in her own house.
When no one was in a room with Rose, her father, brother or I would whistle two notes and she knew to echo the two notes back. We whistled instead of calling her name so she knew we were just checking on her instead of needing her to come to us. We whistled to her about every three minutes. It got to be so much of a habit that I would catch myself whistling notes when Rose was not with me. She slept with me during these terrible months. Sometimes she would whistle in her sleep.

We referred to this technique as “echo whistling.” If she did not repeat our two notes we would call her name. If she did not answer, we would rush to find her. Sometimes she was just too busy to answer, but a few times we would find her unconscious, leaving me feeling feel guilty about leaving her alone. Negligent for three minutes. Shame on Seizure Mama!

Take a chair, echo whistling, stair pairs. This is how we kept her safe as the seizures took over our lives.

You need to devise methods like ‘echo whistling’ and ‘stair pairs’ as part of your everyday routine to keep your child safe. We used two notes for ‘echo whistling’ because Rose had complex partial epilepsy and could do repetitive automations, even at the onset of a seizure. She could probably whistle during these periods, but could not echo the two notes from someone else.

This is a text widget. The Text Widget allows you to add text or HTML to your sidebar. You can use a text widget to display text, links, images, HTML, or a combination of these. Edit them in the Widget section of the Customizer.
Loading Comments...
Comment
×
%d bloggers like this: